As one of the most revered and versatile medicinal herbs in the world, all it takes is a cup of chamomile tea to start to relax. A close relative to the daisy, chamomile tea has long been used as a natural way to wind down. Even if you aren’t ready to go to bed, a tea infused with chamomile will work to keep you healthy. Long valued throughout the ancient world for its medicinal value, chamomile tea has anti-inflammatory properties and works to lessen the effects of asthma, colic, fevers, nausea and anxiety.

The German chamomile flower has a scent that is reminiscent of apples. Interestingly, essential oils derived from this chamomile is blue colour due to its organic compound, azulene. It is traditionally used for its calming and soothing effects. Although it is a slight bitter taste, every part of the plant is edible and can be used in salads.

Like the German chamomile, the Roman chamomile also smells like apples. However, the Roman chamomile leaves are thicker and unfortunately, the flowers bloom less. Its essential oil is clear as it contains lower levels of azulene. Roman chamomile tea is also used to improve problems involving the gut, such as nausea, heartburn and vomiting. Due to its inflammatory properties, it can also help to alleviate skin inflammation.

Egyptian chamomile is supposedly the highest grade of chamomile in the world. It is grown along the thriving Nile River in Egypt, absorbing the earthiness of nature which lends to the flowers’ warm and earthy taste and fruity fragrance. Egyptian chamomile tea has a rich deep-yellow to golden colour and has great relaxing and soothing properties.

Enjoy the calming effects of chamomile with Nilufer Tea’s Lemon & Chamomile herbal tea. Get it here for a moment of serenity 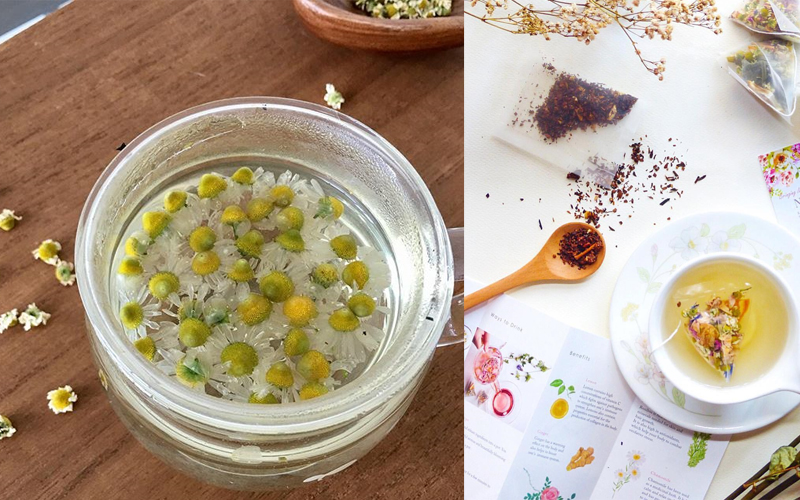